← more from
TRAIN FANTOME
Get fresh music recommendations delivered to your inbox every Friday.
We've updated our Terms of Use. You can review the changes here. 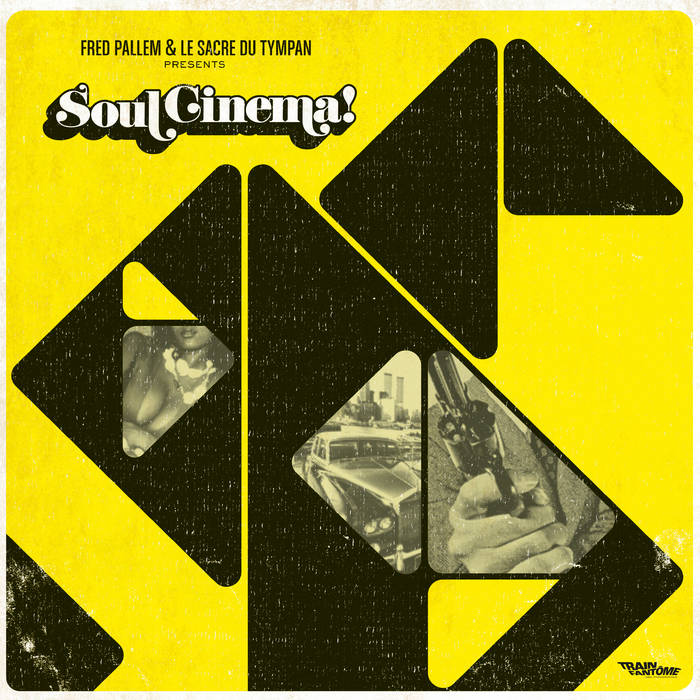 Yokrimi The cover of the classic Coffy track is insane, just like the rest of the Lp Favorite track: ARAGON (Roy Ayers).

"What is Soul? I don't know" said George Clinton In 1970 on Funkadelic's first LP. In 2017, here's another question: "What is soul cinema ?" The answer ? Fred Pallem has it. This man is the head of the collective Le Sacre Du Tympan, and the one who created this stereophonic concept locked inside these two slices of black vinyl.
"In the beginning, there was this programme I decided to play after a residence at the club La Clef" explains Fred. "There were three themes linked to the movies : one on composer François De Roubaix, one on the French Touch scores, and Soul Cinema was the third. I imagined a DJ set, but with live musicians. Some covers we'd make our own, some tracks that would fit the musicians I share the stage with. If there's hits then it's great, but that's not the goal".
Soul movies... Blacksploitation, then? Not really : "I don't like the term, I think it's ugly and it doesn't sound right ". Well, all the better : Fred's concept goes further than this caricatural expression. Proof : "Dirty Harry's Creed" by Lalo Schiffrin, from Magnum Force original soundtrack, the second coming of Harry "Make My Day, Punk" Callahan's adventures. "It's a music that always moved me, that's my favorite Lalo tune, very simple, with elements of contemporary music and a great rhythm section, Carol Kaye on bass. It was bound to mesmerize me".
Another wonderful miscast is the great "Ampersand (&)" by Stu Phillips, from Russ Meyer's 1970 masterpiece soundtrack Beyond The Valley Of The Dolls (released in France in 1975 on the porno circuit and retitled Orgissimo, an info you can drop during your next dinner with friends).
This gonzo B-movie directed by Russ for 20th Century Fox was, according to film critic Roger Ebert (who also wrote the script), "a movie that seemed to have been done by accident the day the lunatics had taken over the asylum". The music is as mad as the flick: psychedelic moods and alien grooves, sixties rock style. "With this track, I bypass the blacksploitation etiquette. I needed tunes that fit together and this one is a big psychedelic delirium, so it's perfect for improvisation". Surprising anecdote : the character of freak producer Ronny "Z-Man" Barzell, inspired by Phil Spector, kills the singer of the girls group Carrie Nations with a gunshot in the mouth. 33 years later, in february 2007, reality imitates art when Spector kills starlet Lana Clarkson the same way.
But Fred Pallem is sticking to the Soul Cinema concept with gusto when he plays Blacula's theme, a wacko horror movie in which the famous vampire, played by William Marshall, is black. The score is by Gene Page, master of string arrangements who did a lot of disco and worked on more than 200 gold and platinum records. His work on Blacula is cherished by cult classics lovers, and that includes Fred. "I love the sound of this score. It sounds as if it was recorded in a cave, it's dirty, musicians are not always tight and I just love all that. Music doesn't fit the images, it's funny when it should be scary, there's funky rhythms when you're supposed to be terrified".
More orthodox but funky nonetheless, "Aragon" by Roy Ayers, included in Coffy's soundtrack (the french retitled it Harlem's Black Panther). The groove of Roy's vibraphone backed by a wicked rhythm section, Richard Davis and Dennis Davis (Bowie's drummer during the seventies), is recreated with devilish skills by Le Sacre Du Tympan, with super heavy funky horns courtesy of Le Journal Intime, a three men unit with an added trumpet player.
And now we come to the main man, sir Quincy Jones, Q for his friends, here on two tracks with "Main Squeeze" (from The Lost Man soundtrack, 1975) and "Call Me Mr. Tibbs/Moneyrunner". "Quincy Jones didn't work for a long time in Hollywood, about ten years, but you feel his gospel and soul touch. He also knows how to be funny and his compositions are ideal for Soul Cinema. It was a must for me to have them".
Six instrumental orgasms are here enclosed, played by virtuoso musicians who are clearly enjoying themselves. And three vocal tracks are added as digital bonuses: Curtis Mayfield's "Superfly" by Lisa Spada, Isaac Hayes' "You're In My Arms Again" (from the movie Truck Turner) by Dom Farkas and James Brown's "Down And Out In New York City" (from Black Caesar) by Hugh Coltman. "Hugh, I met him in a studio a long time ago when I was working with Sébastien Tellier, and we connected just like that. I knew Dom Farkas cause I saw him sing in all of the "Poésie B" happenings and I was a fan of his band, Trash Corporation. So I knew what he was capable of and I couldn't miss this opportunity to have him sing with me. I met Lisa Spada in a studio when Sandra Nkaké introduced us. A great encounter ".
6 + 3, the magic numbers. And the whole shebang was recorded live on analog tapes, with no re-recording, at the famous Ferber studio after four gigs, including one sold out in Paris' New Morning.
"For the vinyl, I chose the six instrumentals with the most fun in impro, that was my idea from the start. It was done naturally, it's a one shot project played live for a limited edition vinyl LP. We did two takes for a couple of tracks but it was all live, nine musicians and three singers, the Dirty Dozen!"

Fred is a composer, arranger, bass player and bandleader with his orchestra LE SACRE DU TYMPAN. His instrumental tunes are at the crossroads between jazz, funk, soundtracks.

Bandcamp Daily  your guide to the world of Bandcamp